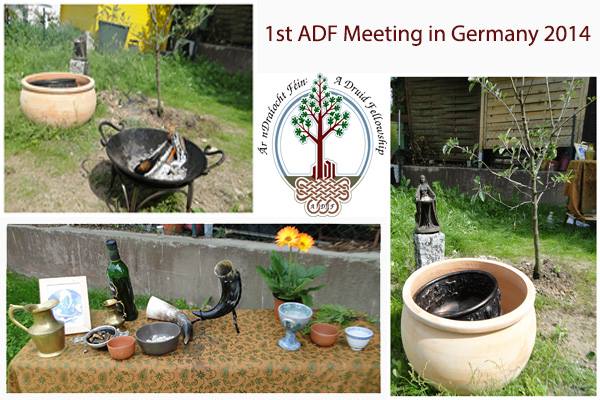 On Thursday Nov 6, Wiccan Priest Blake Kirk returned to the Huntsville Alabama City Council chambers to deliver the pre-meeting invocation. As we reported last June, Kirk had been removed from the schedule due to complaints by various citizens. After that news was made public, the Huntsville city council opted to continue opening meetings with invocations that reflect the city’s religious diversity.

Kirk was placed back on the schedule and, last week, delivered the prayer before the council meeting. He opened with, “Let us pray. O gentle Goddess and loving God, we thank You for the beauties and the wonders of the day that You have given to us, and for the opportunity we have this evening to assemble here and work together to make Huntsville a better city for all of its residents. We ask that You grant to the councilors and other officials present here tonight the wisdom they will need to make the best decisions that they may for the governance of our city.”

Now that the season has turned and we are nearing the end of the calendar year, we look back, one last time, to review the year. What happened? What didn’t happen? What events shaped our collective thoughts and guided our actions? In our worlds, both big and small, what were the major discussions? What were the high points and low?

The year 2014 kicked off with several debates already simmering. Early in January, Oberon Zell-Ravenheart’s quest to capitalize Pagan, which had begun in the fall of 2013, came to an end as the coalition mailed its petition to various style guide editors.  Although the immediate response was less than encouraging, The Associated Press did eventually revise its style guide to include Wicca. Whether the coalition’s work influenced that change is unknown. However, its letter may have triggered some level of awareness leading to that addition.

Another conversation brewing in those early months culminated in a packed PantheaCon session hosted in the CoG/NWC/NROOGD suite. The debate over “Wiccan Privilege,” which began with a single article in the November 2013, inspired or incited a four-month blog-based debate. If nothing else, those conversations showcased the diversity and breadth of religious practices that, not only fall under the Pagan umbrella, but also run alongside it and near it; and often intersect with it.

Over the remainder of the year, many of these non-Wiccan based traditions and practices continued to demonstrate growth and forward momentum. For example, in September, Polytheist.com was successfully launched and, more recently, Many Gods West, a new Polytheist conference, was announced. In August, the U.S. Air Force added Heathen and Asatru to its religious preference list.

As winter thawed into the brightness of spring, our collective communities were rocked with the news of Kenny Klein’s arrest. It served as almost a “wake-up” call, unearthing buried concerns, personal pain and collective traumas. Eventually the difficult conversations led to action. In May, the Council of the Phoenix was born, created by Green Egg Magazine editor Ariel Monserrat. In August, the Covenant of the Goddess established its own internal abuse advisory committee led by professional social workers and a psychotherapist. More recently, Lydia Crabtree established Pagan Pro, a project that proposes to qualify leaders. While time eventually gave way to other concerns, Klein’s arrest and the ensuing conversations brought to light serious problems that lurk in the shadows of many communities – not just Pagan or religious ones.

By late spring and early summer, attention had turned to the national and international news arena. In May, SCOTUS ruled on legislative prayer, “upholding the right of legislators to offer sectarian prayer before conducting business.” In June, SCOTUS ruled on the Hobby Lobby case, concluding that “some for-profit employers with religious objections do not need to provide contraception coverage under the Affordable Care Act (ACA).”

During that same period, Middle East violence began to heat up, drawing our attention to a world in crisis. ISIS, ISIL and now the IS became a household name, as the militant organization continued its assault on Middle Eastern territories and peoples. In addition, the Israeli and the Palestinian conflict escalated into a new round of military action. Israeli Pagans, reporting from within the war-torn region, called out for compassion and peace. Throughout 2014, we covered other big stories originating from or affecting international Pagan communities, like the one in Israel. For example, the U.K.’s Centre for Pagan Studies, together with the Doreen Valiente Foundation, commemorated Gerald Gardner with a Blue Heritage Plaque. In South Africa, we spoke with SAPRA’s Damon Leff about the continued use of Witchcraft as a political weapon.  And, in Italy, the new Unione Comunità Neopagane was born.

As the wheel turned and summer came to an end, Pagan Pride Day and other harvest events were in full swing worldwide. For many people, it was “festival-as-usual,” but not for the Wisconsin-based Circle Sanctuary. Samhain 2014 marked the organization’s 40th anniversary, which it celebrated with month-long podcasts culminating in a single big birthday celebration.

At the same time, a uniquely modern problem emerged. First publicized by Sister Roma and other members of the drag queen community, Facebook “real name” policy became a thorn in many Pagans’ sides. Some of those affected included Silver Ravenwolf, Storm Faerywolf and Raven Grimassi.

Ironically, as many Witches struggled with Facebook over use of their Craft names, many of these chosen names were being featured in the mainstream news media. October is the month to interview a witch. These were not the year’s only triumphs. In Aug., Wiccan Janie Felix won her legal challange to Bloomingfield, New Mexico’s erection of a Ten Commandments momument. In Virginia, Priestess Maya White Sparks led the successful quest to remove antiquated anti-Tarot codes from the Town of Front Royal’s books. We also saw two Georgia college students defy the odds and form a campus-based “Old Faith Community” in their highly conservative school environment. And, finally, the New Alexandrian Library earned a certificate of occupancy and began the slow process of unpacking.

To add to that positive momentum, 2014 saw four openly Pagan or Heathen candidates, including Cara Shulz in Minnesota, Kathryn Jones of Pennsylvania, Robert Rudachyk, in Canada’s Saskatoon West, and Ireland’s Deirdre Wadding, who won a seat on her local council.

As the final days of 2014 approached, holiday celebrations were once again tempered by national events. Just before Thanksgiving, our attention was drawn to a new place – Ferguson, Missouri. Since that day, the United States has not been the same. Frustration, pain, confusion and feelings of helplessness mingle with daily protests and pure rage. Over the past month, many people have donated time and money; spoken words of solidarity in many forms; have grieved; and have looked for ways to be part of a solution. This is story yet to be fully written. Above are only a fraction of the many stories, reports and events that have touched our lives over the past year. There are so many others – ones that we reported on and even more that we didn’t. If we could sum the year up in one phrase or term, it might simply be #2014. The hashtag has became an increasingly useful rallying point, external to its Twitter origins, for many of the events and actions that have occurred throughout the year, from #PantheaCon, #PACO and #PaganPride to #MyNameIs, #ClimateMarch, and #blacklivesmatter.

As the final days of 2014 tick to a close, we say goodbye to what has been, and now ready ourselves for what is to come. #Bringon2015